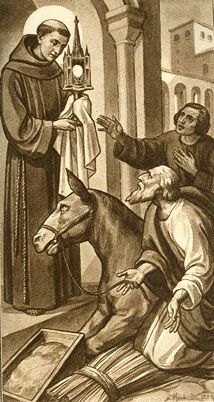 A man doubted the Real Presence of Jesus in the Eucharist, until he saw this.
St. Anthony of Padua lived during the 13th century and possessed a great zeal for the Real Presence of Jesus in the Holy Eucharist. One day Saint Anthony heard of a man in Rimini named named Bononillo who did not share the same belief. In fact, Bononillo openly mocked people who believed that Jesus was truly present under the appearances of bread and wine.

St. Anthony tried his hardest to convince Bononillo with the proofs of scripture and argument, but discovered that the man was as stubborn as a mule.

To prepare for the event, St. Anthony fasted for three days, and Bononillo in turn told everyone in the town. Bononillo was convinced that the mule would think nothing of the Eucharist and ravenously eat the pile of hay.

On the day of the test, Bononillo brought his mule and placed the hay under the mule’s nose. St. Anthony came and stood a distance away with the Holy Eucharist. Defying all odds, the mule turned his head and walked over to Saint Anthony. When the mule was close, the animal bent his front legs and kneeled in adoration! When Bononillo saw this miraculous change of events, he immediately knelt down and professed his belief in the truth of the Real Presence.

What this short story tells us is that Eucharistic presence of Jesus is something miraculous and supernatural. It is a gift that Jesus gave to his Church, one that reason alone cannot explain. Faith is required to hold to such a fantastic belief. It reminds us that what we witness each Sunday (and every day) is beyond our understanding.

The Catechism affirms this fact and declares, “That in this sacrament are the true Body of Christ and his true Blood is something that ‘cannot be apprehended by the senses,’ says St. Thomas, ‘but only by faith, which relies on divine authority.’ For this reason, in a commentary on Luke 22:19 (‘This is my body which is given for you.’), St. Cyril says: ‘Do not doubt whether this is true, but rather receive the words of the Savior in faith, for since he is the truth, he cannot lie'” (CCC 1381).

St. John Vianney put it perfectly, “If we really understood the Mass, we would die of joy.”